Steam Deck – Valve’s new portable gaming Pc – Is it worth it? 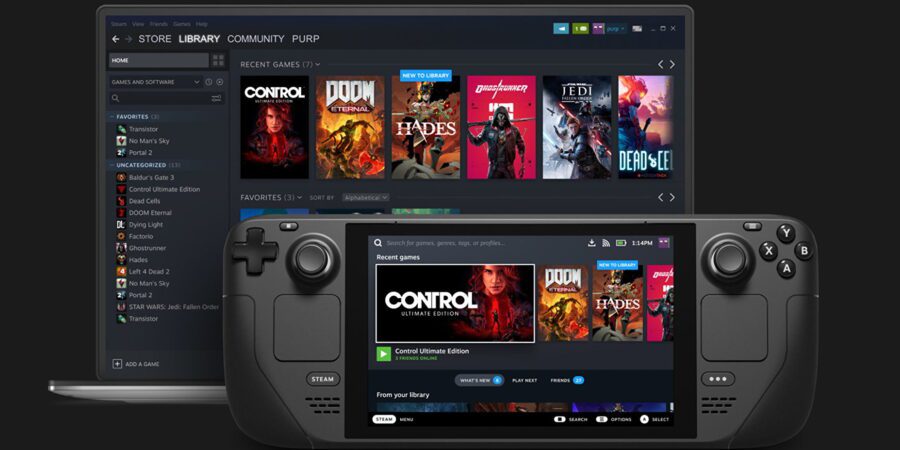 As Valve’s Steam Deck announcement takes the globe by storm, it’s time to consider if the portable PC system is worthwhile.

Valve has just introduced the Steam Deck, a new portable gaming platform. While the Steam Deck resembles other handheld consoles such as the Nintendo Switch in appearance and operation, first impressions indicate that the device is more akin to a portable gaming PC. Furthermore, while the Steam Deck is designed to play games from the Steam library, skilled players could potentially repurpose to perform almost everything a regular gaming PC can do. As a result, while evaluating Valve’s pricing points of $399/64 GB, $529/256 GB, and $649/512 GB, it’s crucial to examine its capabilities outside of SteamOS since fans will undoubtedly take it there.

The Steam Deck has AMD’s Zen 2 microarchitecture with four cores and AMD’s RDNA 2 GPU for a total APU power of roughly 1.6 teraflops. As a result, the Steam Deck’s capabilities are approximately comparable to the PlayStation 4 and Xbox One. Even said, since it operates at a lesser 720p resolution, the Steam Deck should beat the PlayStation 4 and Xbox One marginally in practice. It’s also worth noting that there are no performance variations between any of the pricing ranges; rather, the higher price represents quicker and more prominent storage across models, as well as an anti-glare etched glass screen.

There isn’t much-wasted space on the Steam Deck’s face, given the sticks, directional pad, buttons, and touchpad. Thus the bulkiness is necessary. In addition, the Nintendo Switch comfortably outlasts the Steam Deck in battery life (two to eight hours vs four to nine hours for the Switch), with the Steam Deck potentially using even more juice owing to the Steam Deck’s more demanding game content.

Valve’s CEO, Gabe Newell, termed the Steam Deck’s cost as “painful,” but it looks that his efforts paid off. The Steam Deck’s basic model is just around $50 more costly than the Nintendo Switch (OLED Model). For simplicity, both consoles are reasonably priced for the features they provide, with the significant difference between them being their respective game libraries and the Steam Deck’s power edge over the Switch. However, keep in mind that the Switch is likely to be the more streamlined and user-friendly of the two, with a large library of tried-and-true portable titles to choose from.

There’s one crucial component of the Steam Deck to keep in mind. While Steam has a library of over 50,000 games, none have been built explicitly for the Steam Deck. As a result, most PC games designed to be played with controllers or need less accuracy than a mouse and keyboard will still function well.

That criterion, however, excludes the most popular titles, which now dominate Steam’s top most-played list. CS: GO is now the most popular game on Steam, with Dota 2, PUBG, Rust, and Apex Legends following closely. Rust seems to be the only game on that list where an on-the-go player may be competitive unless they use the Steam Deck like a PC and plug in a mouse and keyboard.

The Steam community’s members who like high-level, competitive games like Dota 2 and CS: GO are unlikely to utilise a portable machine. The Steam Deck, on the other hand, provides almost everything a casual player might want. It will be capable of running award-winning indie games like Hades smoothly, single-player games like Sekiro would be ideal, and players could even play Lawn Mowing Simulator if they wanted to.

Customers would likely find it difficult to choose between the three types of the Steam Deck since the differences are mainly in storage space and speed. However, the two more costly options (the 256/512 GB models) include NVMe drives, which means they’ll load quicker than the basic 64 GB model.

While all three versions include an SD slot for expanding memory, purchasing a microSD card to bridge the gap in storage capacity, say from 64 GB to 256 GB, brings the overall cost closer to 256 GB Steam Deck. Customers may wish to go for the more costly variant straight away since it will have the NVMe discs stated before. The 256 GB looks to find the sweet spot in terms of capacity, along with the rest of the bundle.

Finally, prospective Steam Deck owners should think about one more thing. The current pricing does not include the official Steam Deck dock, which means that the overall cost of the purchase, particularly at the upper end, might quickly escalate. But, again, the Steam Deck appears to be worth it from nearly every angle. Still, if gamers opt for the 512 GB version, which includes a large MicroSD card for additional storage, the official dock, as well as peripherals like a mouse, keyboard, and headset — such as the Razer Barracuda X — the price quickly rises above the $649 entry point.